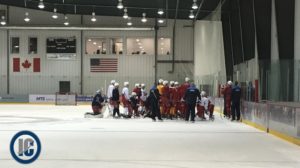 As of right now the Jets have 24 players on their roster but you can expect the team to either place Brendan Lemieux on injured reserve or if he is healthy to re-assign him to their AHL affiliate Manitoba Moose.  The deadline is tomorrow at 4 pm CT to set their 23 man roster.  Another factor is the health of Drew Stafford and Shawn Matthias who both skated today in yellow non-contact jerseys but we were told by coach Maurice that he expects them to be in the lineup on Thursday provided they don’t have any set backs.

The Jets started training camp back on Friday, September 23rd with 59 players.  Originally there were to have been 60 players in camp but Jacob Trouba’s agent announced that his client had requested a trade and would not be reporting to Winnipeg.