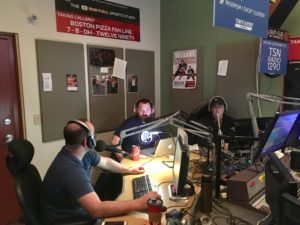 Topics: The Jets take a 2-0 series lead over the Minnesota Wild with a 4-1 win in Game 2, Finding a name for the Winnipeg Whiteout Donald Street party, The atmosphere inside Bell MTS Place, Andrew Copp moves up to the third line, Matthieu Perreaults health, The play of Dustin Byfuglien, Breaking down the goaltending battle between Devan Dubnyk and Connor Hellebuyck, Bruins defeat the Leafs 5-1 in Game 1, Nazem Kadri is suspended for three games for his hit on Tommy Wingels