Here’s a look at some likely first round selections who may be available to the Jets at picks 17 and 25.  (we also looked at the players less likely to be available here).

Svechnikov is the prototypical Russian forward – a big, skilled winger who can score. He played this past season in Cape Breton of the QMJHL where he put up solid numbers – 78 points in 55 games. He has a very good shot, and is good at using the size and reach afforded by his 6’2 frame to get to the net. Skill-wise, he is easily a second-line winger, who has the potential to be something more. Like most Russians, chances are he’d be held in higher regard if the same package came with a Canadian birth certificate.

If you’re looking for a playmaking centre, Nick Merkley is a heck of a find this far down the list. Merkley plays for the WHL championship winning Kelowna Rockets, where he led the team in scoring with 90 points in 72 games. That included a whopping 70 assists. And while he’s not huge at 5’11, he is pretty thick bodied at 190+, and plays with an edge. Like most smaller players who can’t dictate with size, his skating will need to be top-notch in order to create space at the next level; if he’s able to improve on that a bit, a team picking in the teens or early 20’s will be very happy indeed. 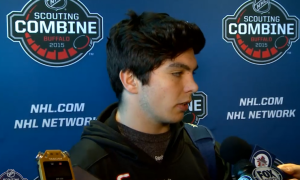 Zboril is generally the next defenceman on the list after the top-three – Hanifin, Provorov, and Werenski. A left-handed defenceman, he has good size (6’1), skating ability, and skill, scoring 13 goals and 33 points in just 44 games last season. He plays in St. John of the QMJHL along with another defenceman likely to go in the 1st round – Thomas Chabot. While opinions certainly differ, many scouts feel that Zboril has more upside than Chabot and some of the other defencemen who tend to be clustered in the late first or early second round. Although the style comparison – Jakub Kindl – hasn’t had a lot of NHL success, Kindl too was a big, left-handed, two-way defender from the Czech Republic, who was an excellent prospect coming out of the OHL, and was drafted 19th in the 2005 draft.

One of the most talented players likely to be available around this spot, Konecny is a skilled forward with nifty hands, a great shot, and a lot of competitiveness. He is all about creating offence, and is able to do it with his playmaking skills, his touch around the net, or a rocket from the high slot. If Konency were over 6’, he’d likely be a top-10 pick, but at a hair under 5’10, some teams may be scared off. However, on a club which already boasts good size amongst its younger players – say, the Ottawa Senators – he might be a nice fit.

While he’s not flashy, Colin White is the kind of player who does whatever it takes to win. A feisty competitor who skates well, he’s more in the mould of a two-way centre rather than a pure point producer. A member of the famed US Development Program housed in Ann Arbor Michigan, White will draw attention from every team looking for a “200-foot player”, but some scouts believe he actually has enough offensive upside to become a 2nd line centre.

Denis Guryanov is certainly the most intriguing player ranked this low in the draft rankings. Another standard Russian winger, he is a big, skilled finisher who loves beating defencemen one-on-one, and creating offence off the rush. He played this past season in a Russian junior league – the MHL – where he scored 15 goals in just 23 games. Like his fellow countryman, Svechnikov, there’s no way this type of talent would be available this late in the draft if they were North American, but the fact that Guryanov still plays in Russia, and is thus perceived as a flight risk, will certainly frighten off a few teams.

Ilya Samsonov is likely to be the first goalie drafted in 2015. By all accounts, he is the most talented goaltender available, and at 6’3, he has the height needed to be a top goaltending prospect today. Since goaltenders have a much longer development curve, the fact that he plays in Russia may not affect his draft stock as much as a skater like Guryanov. In other words, whether he plays two or three years in the KHL, or comes over to North America much sooner, the team that drafts him will likely need to be patient in either case.

Eriksson Ek is an interesting prospect to project. At just 17, he spent almost all of last season in the top Swedish professional league, a league which is nearly on par with the AHL. And while he scored just 4 goals and 6 points in 34 games, just to be playing with men at that age is an accomplishment in itself. He has good size at 6’2, and skates well, but the question is whether he can be an offensive player at the NHL level. Scouts say that when he played against his peer group – other Swedish juniors – he was dominant, but despite that, some think he will is most suited to a third line role in the NHL.

Kylington is one of the most interesting defensive prospects in the draft. He came into the season ranked in the top-10, and often in the top-5. He is a slick, puck-handling defenceman who skates extremely well and likes to create offence. In 2013-2014, he played in the Swedish Hockey League as a 16-year-old, and became the youngest SHL player to score a goal. (Not just the youngest defenceman). However, some scouts soured on him this year, as they felt his defensive game didn’t make a lot of progress, though it’s worth mentioning that he was also slowed partly by injury. He’s seen by many as a “boom or bust” defender, and could be drafted anywhere from the middle of the first round, to the early second round.

Paul Bittner is a big US winger who plays in Portland of the WHL. At 6’4, 200+, his size is his most desirable asset. He’s been a good complementary piece to some very talented players over the past few years, including Jets prospect Nic Petan, and Columbus draft pick, Oliver Bjorkstrand. However, he doesn’t have the skill to create a lot of offence on his own. Expect him to go to a team in the late 1st round who craves size, like Buffalo, Winnipeg, or Montreal.

At 6’5, Carlo is one of the biggest defencemen in this year’s draft. He suited up for the US at this year’s World Junior Championships, where he impressed scouts with his steady, defensive style. Never to be confused with a puck mover, Carlo will be a shutdown-type defenceman at the next level; he would fit well on a number of Western Conference teams who are looking to shut down the high-end offences of Chicago, Anaheim, etc.

Thomas Chabot is a smart, steady, two-way defender from the QMJHL. The teammate of Czech defender, Jakob Zboril, Chabot had a solid draft season, with 41 points in 62 games. While Chabot does everything pretty well, he doesn’t have an obvious, dominant strength like some other defencemen in this draft, but instead relies on heady play to make an impact on the game.

There are a lot of teams that would like to get a player like Jake Debrusk. The son of former NHL’er Louie Debrusk, Jake is a hard-working, versatile, two-way player who displays great leadership qualities. While Debrusk isn’t big at 5’11, he does have a pretty good nose for the net, scoring 42 goals last season on a mediocre Swift Current team. And while his offensive ceiling is probably as a second line winger, he’s the type of player who could play up and down the lineup, and could be used in virtually any situation.

Jeremy Roy is a creative, offensive defenceman. He was incredibly impressive two seasons ago, scoring 14 goals and 44 points as a 16-year-old, rookie defenceman, and followed that up with 43 points in just 46 games this past year. However, he’s a bit small for a defenceman at 6’, and his skating is fairly average. Some scouts look at his talent and believe that with improved skating, he could be a very good second pairing guy who also runs the powerplay, while others see him as a #6 guy at best. Regardless, there’s someone out there who will like his potential, as teams are always looking for skilled, right-handed defencemen.

Brock Boeser is all about goal scoring. He scored 35 goals last season in the USHL, in just 57 games, and he might have the best release of anyone in the draft. However, the reason he’s ranked by most in the late first round is that he doesn’t have a lot to fall back on – he’s a hair over 6’, not a great skater, and not known for his defensive game. His play is reminiscent of Tyler Toffoli – a highly skilled right winger who came out of the OHL, who wasn’t big or fast, and has proceeded to prove everyone wrong since then – apart from the LA Kings, who drafted him 47th overall in 2010.

Jansen Harkins is a centreman who plays for Prince George of the WHL. He has good size at 6’1, competes very hard, and is the type of player who can play in multiple situations. You know it’s a deep draft when a player is ranked this low despite putting up 79 points, but despite the stats, scouts don’t feel that Harkins has tons of offensive upside. In fact, some feel that he will actually fall to the start of the second round. That said, he is also seen as a pretty safe pick, who is likely to be a solid top-9 forward.

Noah Juulsen is consistently referred to as a first-round sleeper. He slowly inched his way up the rankings as the year progressed, to the point where a few scouting services have him in the early 20’s. A two-way defenceman, he brings a bit of everything – size, smarts, and a touch of skill. Juulsen recorded 52 points in 68 games this past season with Everett of the WHL – again, pretty big stats for a player ranked this late in the draft. If he does go outside of the first round, he probably won’t fall very far.

A highly skilled sniper from the QMJHL, he had 39 goals and 88 points, but is dogged by “character issues”

Another skilled forward from the QMJHL, Beauvillier had 42 goals and 94 points with Shawinigan. The main reason he tends to rank outside the first round is his height (5’10 tops), and slight build.

A Swedish defenceman playing in the SHL, Larsson is a well-rounded player with good size and skating ability, but no wow factor.

At 6’4, Carlsson resembles fellow prospect Brandon Carlo, in that he won’t bring much offence to the next level, but he will be asked to shut-down the opposition’s top players.

A right-handed centreman playing in the USHL, he scored 27 goals and 67 points in 65 games this past season. Roslovic is one of the more skilled players who will likely fall just outside the first round.