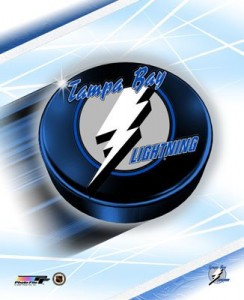 As found at art.com

The Tampa Bay Lightning had a miserable 2008-09 campaign, finishing second to last just in front of the equally woeful New York Islanders. With an anemic 24 wins and 66 points, the one-dimensional Lightning were not scaring anyone.

General Manager Brian Lawton has performed very well over the summer, scoring the highly touted Victor Hedman with the 2nd overall pick in this June’s entry draft, and picking up a second first-rounder in Carter Ashton with the 29th pick. Lawton also signed a number of NHL veterans, most notably Alex Tanguay and Mattias Ohlund, to respectable deals. In making these signings, Lawton has transformed the Lightning from a one-line team into a well balanced squad with decent depth at all positions. 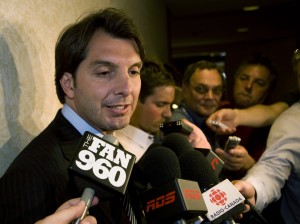 The additions the Lightning made should help them be, at the very least, competitive in the South-east division. With a very strong Washington team and the perennially overlooked Hurricanes to contend with, the Lightning will likely be hard pressed to win the division. That being said, if they get a few bounces and the team gels quickly, I wouldn’t be surprised if they at least put a scare into their foes down the stretch. The team went through a ton of skaters last season, and having a roster that is more or less set should really help in 2009-10. Lawton (pictured to the left in a tbo.com shot) has shown an aptitude for making the team better, and could find himself in a position to be a buyer at the deadline. Lets take a closer look at the team that will likely start the year in Tampa. 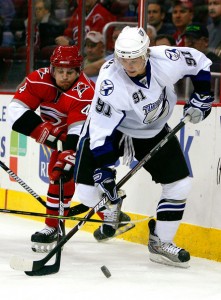 As found at zimbio.com

The Lightning are led by a couple of all-stars in Vincent Lecavalier and Martin St. Louis. Lecavalier has finally matured into the player he was touted as when he was drafted first overall, and St. Louis has made Tampa his team after bouncing between the NHL and the minors for several years. The Lightning also signed Alex Tanguay to a one-year deal this off-season, and he will provided immediate depth to the Lightning’s offensive arsenal.

Past these big three, the Lightning can also throw Ryan Malone and Steven Stamkos over the boards, thus forming the nucleus of a very strong top-6. Though it is unclear as of press time who the extra forward will be, coach Rick Tocchet does have several other players to choose from, including newly acquired Stephane Veilleux and the kinder and gentler Steve Downie.

Rounding out the forwards corps are: Adam Hall, Drew Miller, Jeff Halpern, Ryan Craig, Todd Fedoruk, Zenon Konopka,  and the newly signed Jamie Wright, who was very impressive throughout camp and in pre-season action. How the lines will shake out is yet to be determined, as the Lightning will likely finalize matters tonight in Atlanta. I would imagine they should shake out something like this:

That would leave Wright and Konopka in the press box, should both stick around. The top unit of Lecavalier and Tanguay seems pretty well set in stone. They have developed excellent chemistry already and were lethal on the powerplay in my one viewing of the team. Finding a full-time right winger could be an issue here, but former bad boy Steve Downie has been well behaved all camp and has shown a willingness to play tough. With him riding shotgun, the two offensive stars should have plenty of room to operate.

The second line of Stamkos centering St. Louis and Malone appears just as lethal. An equally nice blend of size and finesses, this unit really provides a 1A option for the Bolts. Stamkos came into his own in the second half of last season as he started to assert his offensive talent. St. Louis looks to be re-energized by the new personnel and should have a good start as he looks to secure a spot on Team Canada. Malone is a good compliment here, as he adds some much needed sandpaper to the unit. Lets not forget though that he can also score when he wants to, thus providing Coach Tocchet with some wiggle room when other teams attempt to hard match lines.

The Bolts third line will be the key to their season, in my opinion. Last year, without a true shut down line, the Lightning had a hard time stopping other squads top guys. Veilleux is a bona-fide shut down guy that can chip in with some timely offense, and is a tough guy to play against. Paired with Halpern and the speedy Miller, this line should provide the Bolts and their coaching staff some reliable shut down minutes to give the top two lines a break. Though Miller might find himself a spot on the top unit as their right-winger, his speed and versatility will come in handy on this line.

The 4th line is a little bit of a superfluous situation, with Jamie Wright seemingly having made the team. Todd Fedoruk is the most likely left-winger, as he provides the team with an enforcer/banger that can skate with the team. Veteran Ryan Craig is the de facto choice as pivot on this unit, but newcomer Wright would look alright in that role as well. Adam Hall, one of the few natural right-wingers on this team, is the most obvious choice to round out the unit, but he too could find himself moved up the depth chart. Keep in mind that this configuration could end up being wildly different depending on how Tocchet wants this unit to perform. They are most likely destined to be an energy bunch, but should the team need some more offense, they could be composed of some guys that could outscore in a soft minutes role.

All told, this is a vastly improved group from last year. It has depth, balance and size and should be more than enough to compete on a nightly basis. Watch for Rick Tocchet and Co. to get the most out of this group. 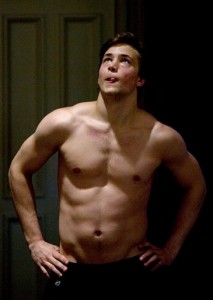 The Bolts defense also received a significant upgrade over the summer. Veteran Mathias Ohlund was signed to a long term deal to provide stability and a mentor to Victor Hedman. Kurtis Foster was also signed, and the bruiser Matt Walker was added to the fold from Chicago.

Of course the most hyped addition has been 2nd overall pick Victor Hedman, who has looked quite good in pre-season action. Hedman (pictured), who has been playing pro hockey in Sweden for a couple of season, seems physically and mentally mature enough to step in and compete immediately. He will likely line up on the 2nd pairing with Kurtis Foster on a unit that will be counted on to provide some offensive pop for the Tampa Bay team.

The aforementioned Ohlund should skate with Andrej Meszaros on the top unit, combining a healthy dose of size with some limited offensive upside. Both big men, the pair will have to provide Tampa with some reliable shut down minutes, as they should see the bulk of the work against the stars of the league. In addition to their top line minutes, these two should also see a lot of work on the power-play (2nd unit), where Meszaros’ big shot will be a useful tool to keep opposing penalty killers honest.

Rounding out the top-6 are Paul Ranger and Matt Walker. Ranger is thought to be nearly recovered from injury and should be ready to go soon (I believe he will play tonight versus Atlanta). Though Ranger was once a threat on the powerplay, his shoulder injury and the new talent has pushed him into this bottom pairing role. Walker, a right handed shot, will be counted on to provide the no-frills style he displayed in Chicago. Not a huge offensive threat, he still makes a good first past and is very responsible in his own end.

To recap, the pairings should go as follows:

The extras on the point are likely Lukas Krajicek and Matt Smaby, though I would expect both see at least spot duty this season. As with the forwards, this is a much improved group that will provide a big boost to the Tampa forwards and netminders.

Tampa, true to form, had some movement in the crease over the summer. One-time goalie of the future Kari Ramo bolted for the KHL, and former Flyer Antero Niittymaki was brought in to compete for the top job with Mike Smith. While Smith is still the likely starter, I would imagine he spends most of the year looking over his shoulder. For the coaches, it will be nice to have a little stability in net, as the Lightning have had something of a revolving door for goalies the last couple of seasons. 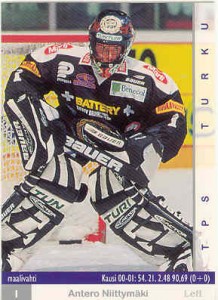 It should be a slightly easier season for whichever netminder gets the call in Tampa, due to a much improved defense. Smith has looked good in pre-season, while Niittymaki has some good experience with the Flyers and can get hot for prolonged stretches. I would imagine the competition between the two should be good for everyone, and provide a high level of confidence to the team as a whole.

Former Spokane Chief Dustin Tokarski was sent down to Norfolk, and will be the likely candidate should a call-up situation arise. Riku Helenius is also available, but reports indicate Tokarski out played the Finn in training camp.

Like the rest of the team, the goalie situation is looking much better, and the possibility of a playoff berth is not out of the question should these two goalies be able to at least adequately hold the fort.

There is no doubt that this is a much improved team, at least on paper. Having seen them once live, their power play looks lethal, they can move the puck and the big guns look motivated. I would put their ceiling as somewhere between 7th and 8th in the East. I don’t think they knock off either Carolina or Washington, but I bet they leapfrog both Florida and Atlanta. I would anticipate that they would need about 89 points to accomplish this feat.

As a floor, if the wheels come off and the injury bugs sets in, I would place this team no farther down the standings than 11th. They simply have too much depth up front to free-fall. The wild-card is the Olympics. With many Lightning players either on a team or on a bubble, how they perform before and after is going to have a huge impact. Should be fun to watch either way.