The Jets practice as they hit the mid point of the homestand. 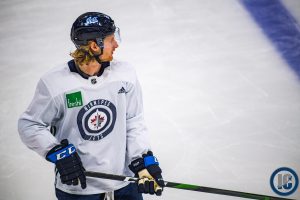 The Jets are 2-1-0 to start this six-game homestand and will be looking to move back into the win column when they face the Sharks tomorrow night in a Valentine’s Day lovefest.

Forward Andrei Chibisov was recalled from the Moose.

According to Mitchell Clinton of Jets TV no Blake Wheeler or Bryan Little at today’s skate.  He also supplies the lines and D pairs below.

Josh Morrissey on head coach Paul Maurice signing a multi year extension, why he thinks he is a great coach, why has his message been able to continue to resonate with the team, does he get asked about his coach from management and Poolman getting close.

Tucker Poolman on the road to recovery, how does he manage being out of the lineup when he misses a number of games, has it been easier with how the team came out of the break & excitement to re-join the push for playoffs.

Mark Scheifele on Maurice extension, how would he describe him as a coach this season in particular, what kind of feedback was he asked for, what has he done for him personally, how has his message stayed relevant, idea of coach ‘losing a room’ & what was the most important thing he did when he came in terms of changing the culture?

Patrik Laine on his reaction to hearing that Paul Maurice was extended, what he does to allow players to reach their potential, what he is like behind the scenes, has he seen the harsh side of Paul Maurice and importance in having the same guy delivering the same message to maintain continuity.

Coach Maurice indicated that Blake Wheeler is under the weather.  They’ll make a decision on his status tomorrow.

The Jets will take on the Sharks tomorrow night at 6 PM.  Be sure to keep it locked to illegalcurve.com for the AM Papers which go live at 7 AM.