Note:  The Jets hit the ice for a practice on Friday as they got ready for today’s afternoon contest against the Senators.  We got an update on Bryan Little as well as some insight into who will be in the lineup for Winnipeg.  Puck drop is at 1 pm.  Be sure to check back for the Reaction from the Room following the game.

Note II:  The Moose had a special night last night as they honoured Jimmy Roy with a jersey retirement ceremony prior to puck drop.  The Sioux Lookout, Ontario product spent nine seasons playing for the Moose 1.0 and now fulfills the role of Jets Director of Player Development.  When puck finally dropped between the Moose and Wolves it would be the visitors who skated back to Chicago with a 2-0 win.  The Moose are off today.

Note III:  Tune in for three hours of Winnipeg Jets and NHL talk on the Illegal Curve Hockey Show on TSN 1290 Winnipeg starting at 7 AM which is a weee bit earlier than our usual time.

Winnipeg Sun:  Big Matchup and Five Keys to the game.  Paul’s big matchup is Goalies Laurent Brossoit vs Craig Anderson. His give keys to the game include: 1) The extra man. 2) The stars. 3) Where’s Scheifele? 4) Between the ears. 5) Extra time.

Winnipeg Sun: Jets not sleeping on low strength of schedule ahead. With good reason considering their current place in the standings.

Winnipeg Free Press:  Young Niku still needs a lot of seasoning.  (Paywall).  Key for me in the piece is the idea of having patience. 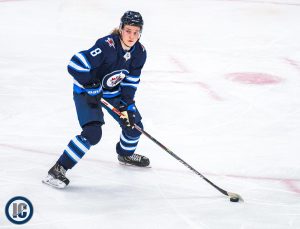 Winnipeg Free Press:  Hot goaltending fuels Jets’ resurgence.  (Paywall).  If you needed to use a movie title to sum up this Jets season it would be the Michael J. Fox flick the Secret to My Success.

The Athletic Winnipeg:  1-on-1 with Patrik Laine, on confidence, contracts and rock-paper-scissors.  (Paywall).  Kenny chats one on one with the Jets sniper and passer on a variety of topics.

TSN: ‘Backbone’ of the Jets, Hellebuyck giving Winnipeg confidence. Following another outstanding effort in a win against the Blues that saw him stop 35 shots, Connor Hellebuyck earned high praise from his squad, being described as ‘the backbone of the team.’ Paul Maurice spoke about the importance of managing Hellebuyck’s workload.