Note:  The Jets didn’t kick off the three-game homestand the way they wanted dropping yesterday afternoon’s game 1-0 to the Predators which may have also cost them Tucker Poolman.  Coach Maurice didn’t have an update on Poolman following the game but he expects to have more information following today’s practice which gets underway at 11 AM CST.  Be sure to check out the Practice Report for the latest news and audio.

Note II:  The Moose were off on Sunday following a less than successful three-game road trip which saw them lose each and every game of the three.  Today they will have morning skate at Bell MTS IcePlex at 10 AM CST as they get set for a 7 PM puck drop.

The Athletic Winnipeg:  The bubble has burst in Winnipeg. So is it time for a shake-up?  (Paywall).  Nice line by Murat “If Winnipeg is serious about silencing its critics – and not its crowd…”.  With just over a month to go in the season it will be very interesting to see what happens prior to the trade deadline.  Does this team get back Little and Byfuglien?  Can they afford to lose a 1st rounder in 2020?  So many questions. 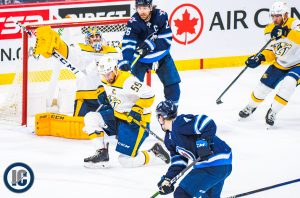 Winnipeg Free Press:  Jets fall prey to Predators. (Paywall).  Tough to see a four point swing like that.  Mike provides his thoughts on the game.