Note: Puck drop is at 7:00 pm for tonight’s game between the Jets and Blues.  After the game, be sure to check us out for all the post-game reaction.

The Athletic Winnipeg:  What the beleaguered Jets defence thinks of media narratives, injury troubles and its own play.  (Paywall).  Us against them is good and all but it isn’t media narratives these guys have to defend against.  It is some pretty, pretty, pretty good hockey players.Winnipeg Sun:  ‘Nothing would surprise me’: Wheeler on Buff playing again.  The best line from the captain in response to this line of questioning was this simply one “Hopefully he picks us again”.  After describing the Mark Stone hit as one of his favourite memories you know Wheeler and the rest of the Jets don’t want to be on the receiving end of a Byfuglien hit. 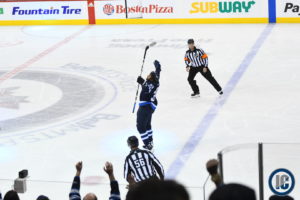 Illegal Curve: Jets vs. Blues pre-game report. The Jets held an optional skate this morning followed by a media availability before they take on St. Louis at 7:00 pm CST. Check out the projected lines and D pairs for both teams.

Illegal Curve:  Coach Maurice pre-game scrum.  Topics included – Why wasn’t he out on the ice?  Where will Nathan Beaulieu go in the lineup?  Was it a tough conversation with Bitetto?  How does he preview tonight’s game?  Need to play the classic road game?  Is Beaulieu the only lineup change?  The depth of the Blues to do this well without Tarasenko.  What is the biggest challenge for Scheifele when he goes up against O’Reilly.