Note: Puck drop is at 7:00 pm for tonight’s game between the Jets and Canucks.  After the game, be sure to check us out for all the post-game reaction.

The Point Hockey:  The unofficial stat Wayne Gretzky calls “an art”.  It would come as no real surprise that Nikolaj Ehlers is in the upper echelon of the NHL in this facet of the game although being the very best at it is pretty incredible when you look at the company he is keeping. 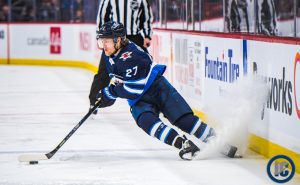 The Province: School still in session as Canucks’ Tyler Myers makes commitment to improving. This one was from yesterday on former Jets Dman Tyler Myers.

Illegal Curve: Jets vs. Canucks pre-game report. The Jets held an optional morning skate this morning followed by a media availability before they take on Vancouver at 7:00 pm CST. Check out the projected lines and D pairs and hear from Adam Lowry and Mason Appleton.

TSN: Jets appreciative of what Copp brings to the team. The Jets discuss the impact Andrew Copp has had on the team since returning from an upper-body injury, particularly in the areas of the game that people don’t often notice. Meanwhile, Winnipeg talks about the challenges Vancouver presents tonight.

Illegal Curve:  Coach Maurice pre-game scrum.  Topics included – Any insight into the D pairings?  Role changes.  The type of game the Canucks play.  How different does the 2nd line look with Andrew Copp on it?  Where are the biggest areas of growth in Copp’s game?  Does he view Copp being able to handle a more offensive role on this team?  What has he seen from Jack Roslovic in the last ten games and his quest for consistency?  What has he learned about Jansen Harkins?  What are some of the things that Mason Appleton done to be effective on the penalty kill?  Is it a ‘tough sell’ to move Jack Roslovic from the second line to the third line?