Note: Puck drop is at 6:00 pm for tonight’s game between the Jets and Habs.  After the game, be sure to check us out for all the post-game reaction.

Note II:  For the seventh time in his career Mark Scheifele was named an NHL Star of the Week.

Winnipeg Sun: #FreeNiku now #NikuFreed; KHL offer, Huddy bust-up revealed in Finnish article.  It has certainly been an interesting season for the Jets 2015 7th rounder.  I suspect the only thing he will want to talk about now that this story has emerged and been dealt with is his play on the ice.

Winnipeg Free Press:  Jets drop out of a playoff spot.  (Paywall).  Get ready for a roller-coaster ride because I suspect it will be up and down until April.

The Athletic Winnipeg: Jets midseason report cards: Analyzing Winnipeg’s goaltenders and defencemen. (Paywall).  Murat hands out some midseason grades.  As per usual lots of insight in this article. 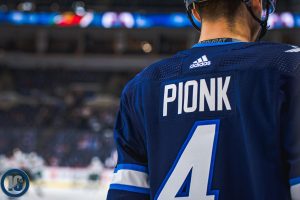 Illegal Curve: Jets vs. Habs pre-game report. The Jets held a morning skate this morning followed by a media availability before they take on Montreal at 6:00 pm CST. Check out the projected lines and D pairs and hear from Blake Wheeler and Sami Niku.

Illegal Curve:  Coach Maurice pre-game scrum.  Topics included –  What does Sami Niku bring to the team?  How does he straddle the line between fearless and reckless?  What goes into choosing a D partner for Niku?  Who will he start with?  On Niku’s misunderstanding with Huddy.  Was that the reason he was in the minors?  Tangible benefits to playing in the AHL.  Pulling Jansen Harkins from the lineup.  What did he learn from the Habs from the first time they played?  What has changed in Patrik Laine’s game from last year to this year?  What has Mason Appleton done on the penalty kill?  With Niku in will the existing D have to do more?  Did he see a freshness upon reunifying the top power play unit?  Has Blake Wheeler become more of a shooter this season?