Reaction from the Room: Rangers 4 Jets 1 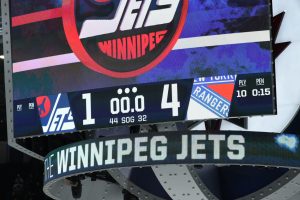 NY Rangers won tonight’s contest as the Jets see their modest three game winning streak come to an end, dropping their record to 29-24-5.

With the lone goal for the Jets Nikolaj Ehlers moved past Evander Kane for ninth in goals for the franchise. He’s up to 110 in his career.

Coach Maurice:  On the shots they generated.  The defensive play of the Rangers. Where did the game turn? On the Jets PK.  Shuffling of the D pairings in the 3rd. Late/Early period goals.

Coach Quinn:  What was he more impressed by through 42 minutes, the 4 on their side or the 0 for the Jets?  What did they do defensively to limit what the Jets could do? What did he think when Igor Shestyorkin got hit and then left?  Shestyorkin’s first game on the road.  What does the first goal late in the period do for the game?

The Jets have an off day on Wednesday  They will continue this homestand on Thursday when they practice in advance of their game against the Sharks on Friday.  You can kick start your day with the AM Jets papers which go live tomorrow at 7 am on illegalcurve.com.