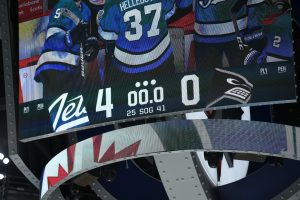 It was just one of those nights for the Jets as they beat the Canucks 4-0 which is the 10th win in a row for Winnipeg over Vancouver.  With the victory the Jets improve to 25-18-4, end their six game winless streak at home and move back into a playoff spot.

Dmitry Kulikov has the flu according to coach Maurice.

Carl Dahlstrom left the game and didn’t return being ruled out by Jets PR as dealing with an upper-body injury.  Following the game the Jets bench boss indicated “Carl’s going to get checked out tomorrow but this one is not going to be short term.  I know that already.  I’ll give you more detail the day after tomorrow but this is not day to day.”

The Jets were scheduled to practice tomorrow but have cancelled so instead they will be back on the ice on Thursday.  You can kick start your Wednesday with the AM Jets papers which go live at 7 am on illegalcurve.com.