A look at the game 44 projected lineups and pre-game audio. 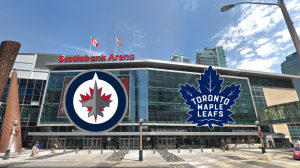 The Jets got Andrew Copp and Sami Niku back into the lineup in the last game two nights ago against Montreal and tonight they may add veteran defenceman Dmitry Kulikov to the mix against the Toronto Maple Leafs as he closes in on a return.  We do know that Connor Hellebuyck gets the start in net for Winnipeg.

The Jets will be looking for revenge against a Leafs team who beat them 6-3 in Winnipeg last week despite the Jets outshooting them by a wide margin (48-28).

As per Mitchell Clinton of Jets TV we learn it is an optional skate this morning with the four players (Mark Scheifele, Blake Wheeler, Luca Sbisa and Josh Morrissey) who missed yesterday all taking part as well as defenceman Dmitry Kulikov.  We will have to wait to hear from Jets coach Paul Maurice as to whether the veteran defenceman will be ready to return.  For now the projected lines are based on the last game for Winnipeg.

Harkins in, Bourque out.
Kulikov not ready to return.

Via Dave McCarthy of NHL.com

Josh Morrissey on what they take from the last Jets game against the Leafs, the road trip so far, getting healthy body backs, on the job Neal Pionk has done and what he has learned about the Wpg blueline this season.

Mark Scheifele on how he is feeling after taking a Laine shot, how special it is to play in Toronto, increase zone time, working with Laine, playing with Matthews/McDavid at World Cup of Hockey and the next generation of players that came from it.

Coach Maurice:  Lineup news?  Does he like where the group is at this point of the road trip?  With the players returning does it lift the team?  The impact made by Neal Pionk.  What stands out about Hellebuyck and his consistency in the first half of the season?  When he coached the Marlies.  Any evidence that Laine was off to start the year?  The growth in Laine.  Laine having more assists than goals.  On three veteran NHL coaches losing their jobs this season.  What has contributed to his longevity in Winnipeg?

Puck drop is at 6:30 PM CST.  Be sure to head over to illegalcurve.com following the game for a recap of the action which includes post-game audio from the Jets room as well as from Coach Maurice.