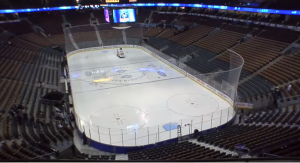 The Jets blew a one goal lead late in the third period when Austin Matthews scored his second goal of the game (31st of the season) but the Jets earned the bonus point in the shootout to improve to 2-0-1 on their four game road trip. The Jets improve their overall record to 24-16-4.

– Mason Appleton scored his first goal of the season (shorthanded);
– ‘Local’ kid Mark Scheifele scored the go ahead goal;
– Scheifele is now tied with Kyle Connor for most goals on the team with 21;
– Laine/Scheifele/Wheeler scored in the shootout.

Coach Maurice:  How hard is it not to be demoralized by the late 3rd period goal?  How would he describe that overtime?  Almost a shame that Wpg/Tor only play twice a season?  Losing his voice.  Appleton’s goal on the penalty kill.  What does he think of the idea to extend 3 on 3 past five minutes?  The late goal against.

The Jets will conclude this four-game road trip tomorrow in Boston.  You can kick start your day with the Morning Papers which go live tomorrow at 7 am on illegalcurve.com.